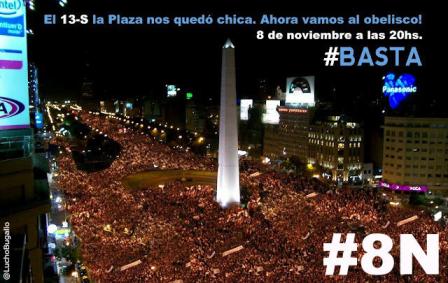 #8N protests at the obelisco on November 8th

I’m ashamed to admit that a version of this post has been in permanent edit mode since mid-September, and has been extremely difficult to write for two reasons.  It will evoke more emotion and generate more controversy than my typical subject matter, and quite honestly as an American white girl from the suburbs I lack the “street cred” that’s preferred when writers tackle touchy subjects like racial or class divides.

Since I last wrote, an Argentine naval vessel has been impounded in Ghana by a US investment fund seeking to recoup unpaid payments from 2001, provinces have made bond payments in pesos that should have been dollars, Argentine debt is getting battered in global markets following a US court ruling that Argentina must make payments to investors who refuse to accept restructured payments, Buenos Aires has had rolling power outages and trash strikes, Argentina has been warned by the World Bank that it will be kicked out, and everybody’s favorite rating agencies Moody’s, Fitch, and S&P have downgraded and put on review a variety of provincial and national debt.  Whew.

And how, in the face of such absurdity, is there still vehement support for this government?  To be blunt, there’s a pervasive issue of classism and racism with a dash of fear-mongering that underscores the Argentine political debate and serves to bolster an economic system that borders on ridiculous.

He’s all smiles now, but wait until he weighs in on politics

I like to play my own version of taxicab confessions to take the pulse of the mean streets of Buenos Aires by asking taxi drivers what they think of the government.  This game could also be called “how to get yelled at by strangers no matter the time of day” because regardless of the political affiliation, the delivery is always the same – intense yelling, vilifying the opposition, and wild hand gestures in lieu of holding the steering wheel.

A personal hero of mine who is a pioneer of cheeky journalism took a stab at pro/anti government dichotomy here that inspires this:

Cristina Kirchner: Eve Peron reincarnate, champion of the poor, defender of the weak

Supporters of the Kirchner administration see the government as a heroic force that saved the country from the evil clutches of globalization and capitalism following the economic crisis of 2001, and that works tirelessly to raise the poor up and support the interests of the country as a whole against the interests of a few wealthy elite who would keep the masses in abject poverty to go to Miami and buy lipsticks and TVs.  Oh and that also supported and would bring back the dictatorship that kidnapped babies and disappeared tens of thousands of left-leaning students and thinkers during the Dirty War of the 1970s.

Anti Government poster that circulated via social media! It was so on my MySpace…

Opposition to the government views Cristina Kirchner as the next Hugo Chavez, and Argentina as on the road to becoming Venezuela or Cuba in terms of travel restrictions, initially democratically elected leaders that entrench themselves, bury opposition and rule from a hospital bed with an iron fist, and a generally garbage can-esque economy.  Oh and they see the masses that vote for these leaders as genuine enemies to achieving true economic and social progress.

Heavy, right?  Said the white girl from the suburbs.  I know.

Now – if the government were lifting millions out of poverty, bolstering education, and creating a sustainable country to lead South America into the future, then isn’t that worth fewer Miami trips and imported tweezers?  Potentially, but let’s delve into a little bit of Latin American “keeping up with the Joneses” and see how Argentina stacks up to its neighbors in terms of poverty reduction and income distribution.

Let’s start with the Gini coefficient, which is a measure of income distribution, or how much richer are the rich than the poor.  A Gini value of 0 is perfect equality, whereas 1 is complete inequality where all the wealth is in the hands of one.

The lower the Gini, the more equal the income distribution (Data from The World Bank)

*boing* I dream of GINI

On this count, Argentina has more equal income distribution than its neighbors; however, check out the rate of change of the lines.  Argentina’s income distribution is improving at almost an identical pace to Uruguay’s, Peru’s, Brazil’s, and Columbia’s – countries that are not defaulting on debt, restricting travel, or experiencing 25% inflation per year.  So while Argentina does have more fair income distribution, the past seven years’ policies have not done anything to set it apart from the crowd.

What about growth?  If you take a gander at the chart below you will notice two things:  Firstly, Argentina’s growth looks quite a bit like its neighbors, except it’s a bit higher.  Secondly, you’ll see that the Venezuela comparison might not be so off the mark.  Following the recovery from 2008’s fun-filled global crisis, the rest of Latin America save Venezuela has posted slowing or steady growth rates because that’s what the world is doing.

It’s getting hot in here – is Argentina on its way to overheating?

Argentina is essentially burning out by manipulating the economy to grow too fast at the expense of stability and sustainability under the pretense of championing the interests of the poor.

And why is this working? Perspective matters, public opinion is easy to manipulate, and the opposition does not make it hard.

I have been told many times by Argentines that they are not Latinos, they are European.  Now maybe there’s an import ban on globes that nobody has told me about, but that’s a ridiculous statement.  Another fun one is that it is not unheard of to  refer to people of native descent as “negros” or “negros de mierda,” translated loosely as “shitty black people.”  I am then told that it’s ok because terms like that do not mean the same thing and are not offensive here as they are in the States.

Back in September there was a decently sized cacerolazo organized and attended primarily by wealthier and upper middle class people.  The protest was against the government’s damaging decisions and restrictions that are visibly hurting the economy and the people, yet the left-leaning newspaper Pagina 12 was able to use a gem of a headline taken from a chant sung by protestors – “El que no salta es negro y K”.

This is a take on a chant sung by soccer fans where everyone jumps around and sings “El que no salta es un ingles”, or “whomever doesn’t jump is English”.  And yes, that is prejudiced against the English but I’m not going into that here.

“El que no salta es negro y K” means that the person who doesn’t join in is black/dark-skinned/of native descent and a government supporter.  Not only does this attitude alienate a massive demographic element in Argentina, it allows the government to point to anti-government protests as racist, elitist, classist, and out of touch with the needs of the people.  No one feels bad for a racist who can’t vacation in Miami and is forced to wear a smaller selection of designer clothes.

The pro-government elements take full advantage of these attitudes, responding to protests by pointing out that these protesters are not like us, they are not part of the people.  While an extreme case, union leader Luis D’Elia repeatedly comments on the whiteness of the opposition and calls them part of a wealthy elite that offers no alternatives.

The end result is a disappointing, depressing disaster.  A government cheats and steals from its people and they continue to support it, largely because the opposition makes it so damn easy.  While I’m tempted to end this post with a pithy blue comment and a smirk and continue in my sassy apathy, I can’t on this one.

Argentina, you need to figure out inclusivity or you will do some combination of crashing, burning, and sinking.  Opposition – get a globe and deal with the fact that you are not European and you share a country with your fellow Argentines.  Government supporters – stop living on a steady diet of bread, circuses, and fear.   Your government is buying your support by exploiting class divides and sacrificing your future.

And I prefer hatemail with a sandwich and a shot of tequila, please.

33 Responses to A Class Act.