When life gives you lemons, cry to the WTO

Starting last week, the US, Japan, and Mexico followed the EU’s lead and filed complaints at the WTO against Argentina’s import restrictions.  Argentina promptly responded with its own complaint – against the US for blocking imports of beef and lemons.

That’s right – Argentina is accusing other countries of interfering in the free market import/export of their beef. Understand that the Argentine beef market is for sure top 10 most protected industries in the world – and not in favor of the beef producers.

Culturally, Argentina views its beef as a source of national pride, and it’s normal to receive “health” advice that it is necessary to eat meat at least once a day.  Important life events are marked by asados, or large outdoor barbeques for which butchers inform you that you must prepare at least ½ kilograms of meat per guest.  For those of you doing the math at home, well done! Math is cool!  But you should be concluding that this cultural pièce de résistance sounds extremely costly for the general public to participate in, especially in such an inflationary environment.

And you’re right!  So to keep beef an affordable part of the Argentine diet (and so imperialistic US/EU consumers don’t snap it all up), the government has in place an honestly impressive array of barriers to prevent the coveted cow flesh from leaving the country. 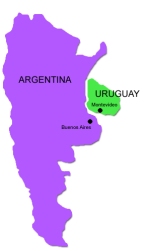 Thank you ,Uruguay, for demonstrating to us that in some cases size does NOT matter

Beginning in 2006, the Kirchner administration kicked off the protectionism with a 180 day ban on the export of beef, hiked the export tariff from 5% to 15%, and then put in place a quota system. Since then, the beef industry has fallen from a place of global renown to a case study in protectionism and corruption.  Argentina now exports less beef than neighboring Uruguay.  And while beef remains less expensive than on world markets, that is less and less comforting as its price rises at the same 30% annual rate as the rest of your grocery bill.

In equally important news, I lost my Blackberry last weekend.  After grappling with the stages of grief, I took a trip to the cell phone store to pay a protectionist price replace it.  But I arrived at the store and was informed that they did not have my model and that it could not be ordered for the foreseeable future.  My options consisted of “select a phone that is made in Argentina”.  And so dear readers, it is with a heavy heart that I inform you that the daily snapshots that I put in this blog will now be from a camera that is hecho in Argentina, lacks a flash, and has about one pixel.

Now I know that Argentina’s international trade complaint regarding lemons and beef may seem to have very little to do with my mobile phone woes, but I assure you that together they demonstrate something special about Argentina’s trade restrictions.

Goods are not crossing Argentina’s borders for two reasons:  protecting domestic industry from competition and balance of payments problems.  The first reason is what shows up in the news and is debated over kitchen tables and asados worldwide – a government responsibility to safeguard national producers against less expensive imported competition.  And indeed, publicly Cristina Kirchner can be seen defending Argentina’s refusal to permit me access to a reasonable Blackberry on the grounds that by forcing me to buy an inferior machine that does not allow me the functionality that I desire and am willing to pay for, she is lifting the nation up into an age of independence from imperialist cell phone exporters providing cameras with flashes and decadent numbers of pixels.

But the reason for Argentina’s recent uptick in protectionism is not to help local producers, it is to deal with the fact that their balance of payments is out of wack.  Basically, balance of payments takes stock of what is coming into and out of a country in money terms – and each import into Argentina is necessarily accompanied by the purchase and outflow of foreign currency (dollars).

Indeed according to globaltradealert.org, over the past 12 months Argentina has topped the chart by implementing the most protectionist measures in the world.  While it must feel good for Argentina to be number one at something from time to time, these measures are creating a crackerjack economy where access to basic inputs and business necessities is limited.

A gold medal in protectionism and Tae Kwon Do

There are legitimate arguments to protect aspects of domestic industry from international competition.  But arbitrarily restricting the import of goods NOT PRODUCED domestically?  Parts needed to bottle wine, bicycle tubes, air conditioner parts, bottle caps, automobile inputs, internationally acceptable Blackberrys… This wave of protectionism has nothing to do with domestic producers and everything to do with a government that is landed itself in a leaky boat and is attempting to plug the holes with temporary fixes.

Argentina’s beef/lemon complaint is as waste of legal resources and newspaper paper.  Argentina’s beef industry faces more barriers domestically than internationally.  If you’re savvy with the WTO dispute settlement mechanism, you are well aware of what is “awarded” to the victor: the right to impose protectionist measures against the loser equal to the amount of trade loss calculated.

And as Argentina is neither seeking WTO approval for nor being sparing with protectionist measures presently, the outcome of any proceedings is about as relevant to Argentine policymaking as how many medialunas I can eat in one sitting. 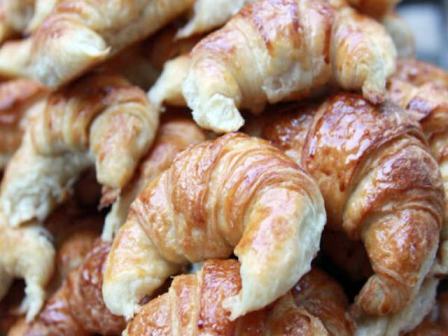 If you are curious, the answer is many

9 Responses to When life gives you lemons, cry to the WTO