The winter weather’s not the only thing chilling the bones of Argentina’s residents –  Since the last week of July, a new set of words have been showing up in the articles about the economy.  Shrinks.  Slows.  Stagflation.  These chilling terms are being used to describe the consequences of what some pretty nasty looking economic indicators might have in store.

On July 26, Citigroup reported that Argentina’s gross domestic product will post its first annual contraction in a decade.  Economists estimate that GDP will shrink approximately 1.7% this year.

The same week, the official government statistics bureau INDEC reported that May economic activity fell .5% year on year, while private economists estimated the fall to be closer to 1.2% and predicted the June drop to be close to 3.9%.  Check out this article to read more about these numbers.

Now, enter stagflation.  For those of you that weren’t alive or were busy eating crayons in the 1980s, stagflation describes a situation with:

This specifically nasty combination of factors earns the name stagflation because it presents policy makers with a dilemma.  Steps that could hem in inflation would actually exacerbate low growth and unemployment, and vice versa.  Essentially, the government is presented with three problems, and fixing one would make the other two worse. 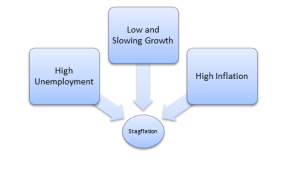 A Trilemma: Try to fix one problem and the other two get worse

While stagflation can be brought on by a large external shock, à la the oil shocks of the 1970s, Argentina’s situation is the result of over a decade of pursuing a growth strategy that combines import restrictions with capital controls to promote domestic growth and high employment.

In 2001 when Argentina opted to default on international obligations and rapidly devalue the peso, effectively losing the ability to borrow money abroad, they did so to pursue a course of action without the harsh effects of austerity currently being protested in Greece and Spain.  And indeed, the past decade has seen growth and relative stability, which led a number of commentators to suggest that Argentina provides an alternative path to countries under strain in the Eurozone.  (See here, here, and here.)

This isn’t a shock yet

The emergence of stagflation in Argentina should serve as a warning to these thinkers.  While some will surely argue that stagflation has been brought on by external factors including the Eurozone crisis and the United States’ continuing faltering, these are factors not shocks.  Furthermore, if Argentina’s economy is stumbling now, what will happen if these drawn out first world crises do indeed develop into full blown shocks?

While the situation is certainly complex and could spawn countless studies and articles looking at the social benefits Argentina has accrued as a result of following this particular growth strategy, it looks to me like the point of unsustainability has pretty clearly been reached.

When Argentina devalued the peso in 2001, it became de facto more competitive on the export market.  Policies were put in place that did in fact support the growth of service and industrial sectors.

But what do growth and competitiveness at the expense of sustainability mean?  The price of a cup of coffee in Buenos Aires might be the only thing it has in common with Paris these days; meanwhile, the streets are rocked on a daily basis by protests and transportation stoppages that exacerbate a pervasive air of creeping downturn.

In addition to donning winter gear, Argentines are battening down the hatches against what is to come.